The USAFS Gen. Hoyt S. Vandenberg, a giant warship used by the military as a troop carrier during World War II and also to shuttle post-war refugees and Holocaust survivors to the U.S., but most recently to track missiles and spacecraft, was sunk off of Key West Wednesday, plunging below the surface in less than two minutes: 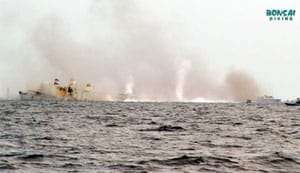 The Miami Herald reports: "It took 14 years, $8.6 million in mostly public funds, endlessvolunteer hours navigating 18 government agencies, and a winningauction bid by a local bank on courthouse steps that prevented theship's purchase by metal scrappers. At 523 feet, the Vandenbergis the second-largest ship ever intentionally sunk to create anartificial reef. The 510-foot USS Spiegel Grove off Key Largo was thelargest when it was sunk in 2002. But four years later, it lost thatdistinction when the 904-foot aircraft carrier USS Oriskany was sunk 24miles off Pensacola. Key West Mayor Morgan McPherson said theVandenberg will be a perfect new tourist attraction, calling it 'thesouthernmost underwater museum on the historic trail of sunken ships inthe Keys.'''

Watch the sinking of the Vandenberg, AFTER THE JUMP…