A letter organized by Florida Rep. Alcee Hastings went to the White House today urging Obama to halt military discharges of gay and lesbian servicemembers. The letter was signed by 76 House Democrats, the Boston Globe reports: 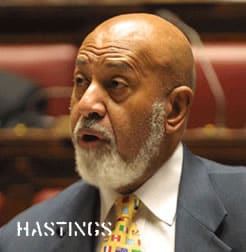 "In the most vocal plea yet for the White House to take the lead inpushing for gays and lesbians to be allowed to serve openly in themilitary, 76 Democratic lawmakers today urged President Obama to usehis executive powers to order a halt to military discharges under thecontroversial "Don't Ask, Don't Tell" law and work aggressively withCongress to pass new legislation to overturn what they describe as adiscriminatory policy that harms national security. 'We urge you to exercise the maximum discretion legally possible inadministering Don’t Ask, Don’t Tell until Congress repeals the law,'states the letter… 'To this end, we ask that you direct the Armed Services not toinitiate any investigation of service personnel to determine theirsexual orientation, and that you instruct them to disregard third partyaccusations that do not allege violations of the Uniform Code ofMilitary Justice.'"

Read the complete letter and see who signed it, AFTER THE JUMP…

The United States of America prides itself on having thefinest military in the world because of the hard work, dedication, andsacrifices of our brave servicemen and women. And yet, under 10 U.S.C. § 654 (Policy Concerning Homosexuality in theArmed Forces), better known as "Don't Ask, Don't Tell," the talents andcontributions of our openly gay, lesbian, bisexual, and transgender (LGBT)service members continue to be ignored simply because of who they are.  Every day, we lose approximately two servicemembers to this misguided, unjust, and flat-out discriminatory policy.  Don't Ask, Don't Tell is not only an injusticeto them, but a disservice to the U.S. military and our country as a whole.

As you know,Don't Ask, Don't Tell was signed into law in 1993 by former President BillClinton as a compromise to allow gay and lesbian service members to serve inthe military – so long as they did not disclose their sexual orientations. Fifteen years later, Don't Ask Don't Tell is instead negatively impacting thelives and livelihoods of these military professionals and depriving our ArmedForces of their honorable service.  Since you took office on January 20, 2009,more than 250 gay and lesbian service members have been discharged under thislaw, which continues to undermine and demoralize the more than 65,000 gay andlesbian Americans currently serving on active duty.

Although we areconfident that you will remain true to your campaign promise to end Don't Ask,Don't Tell, our LGBT service members and our country's national security willcontinue to suffer if initial action is delayed until 2010 or 2011.  Weurge you to exercise the maximum discretion legally possible in administeringDon't Ask, Don't Tell until Congress repeals the law.  To this end, we askthat you direct the Armed Services not to initiate any investigation of servicepersonnel to determine their sexual orientation, and that you instruct them todisregard third party accusations that do not allege violations of the UniformCode of Military Justice.  That is, we request that you impose that no oneis asked and that you ignore, as the law requires, third parties whotell.  Under your leadership, Congress must then repeal and replace Don'tAsk, Don't Tell with a policy of inclusion and non-discrimination.  Thisbilateral strategy would allow our openlygay and lesbian service members to continue serving our country and demonstrateour nation's lasting commitment to justice and equality for all.

As the UnitedStates continues to work towards responsibly ending the War in Iraq and refocuson the threat from al Qaeda in Afghanistan and Pakistan, our LGBT servicemembers offer invaluable skills that enhance our country's military competenceand readiness.  Despite the great strain on our military's humanresources, the Armed Forces have discharged almost 800 mission-critical troopsand at least 59 Arabic and nine Farsi linguists under Don't Ask, Don't Tell inthe last five years.  This is indefensible.  The financial cost aloneof implementing Don't Ask, Don't Tell from Fiscal Year 1994-2003 was more than$363.8 million.  Our nation's military has always held itself to thehighest standards, and we must recruit and retain the greatest number of ourbest and brightest.  To do anything less only hurts our country's militaryreadiness and our service members.

We also want tobring to your attention the most recent examples of the failed Don't Ask, Don'tTell policy in action.  New York National Guard First Lieutenant Dan Choiand Air Force Lieutenant Colonel Victor Fehrenbach are two exceptionalservicemen who have dedicated their lives to defending our country andprotecting the American people.  Their bravery and abilities have beentested in combat, and now they face impending discharge under Don't Ask, Don'tTell.

First LieutenantChoi, a current National Guardsman with the 1st Battalion of the 69thInfantry in Manhattan, is a West Point graduate, Arabic language specialist,and Iraq War veteran who is under investigation for refusing to lie about hisidentity.

LieutenantColonel Fehrenbach, Assistant Director of Operations for the 366thOperations Support Squadron at Mountain Home Air Force Base in Idaho, hashonorably served his country for 18 years as an F-15E pilot.  He hasreceived nine air medals, including a Medal for Heroism during the 2003invasion of Iraq, and was hand-picked to protect the airspace over Washington,D.C. after the Pentagon was attacked on September 11, 2001.  LieutenantColonel Fehrenbach, who has flown combat missions in Iraq and Afghanistanagainst the Taliban and al Qaeda, continues to serve while the recommendationfor his honorable discharge moves forward to a review board, and eventually tothe Secretary of the Air Force.  Just two years away from his 20-yearretirement, he stands to lose $46,000 a year in retirement and medical benefitsfor the rest of his life if discharged.

The Americanpeople and service members of the Armed Forces overwhelmingly support therepeal of Don't Ask, Don't Tell.  According to a national Gallup pollconducted in May 2009, 69 percent of Americans, including 58 percent ofRepublicans, favor allowing openly gay men and lesbian women to serve in themilitary.  Furthermore, a 2006 poll of 545 troops who served in Iraq andAfghanistan by Zogby International and the Michael D. Palm Center at theUniversity of California, Santa Barbara revealed that 73 percent are personallycomfortable with gay men and lesbian women.  JohnShalikashvili, former Chairman of the Joint Chiefs of Staff during the Clintonadministration, and more than 100 retired admirals and generals support thisrepeal, in addition to the Human Rights Campaign, the Servicemembers LegalDefense Network, and Knights Out, an organization of LGBT West Point alumnico-founded by First Lieutenant Choi.

Mr. President,we cannot afford to lose any more of our dedicated and talented service membersto Don't Ask, Don't Tell.  On behalf of First Lieutenant Choi, LieutenantColonel Fehrenbach, and the more than 12,500 gay and lesbian service memberswho have been discharged since Don't Ask, Don't Tell was implemented in 1994,we stand ready to assist you in repealing this dishonorable and debilitatinglaw as soon as possible, and in restoring justice and equality in our ArmedForces.

Please know that we will continue tomonitor this situation and are hopeful that, together, we can address thisurgent issue soon.  Thank you for your consideration and we look forwardto your response.