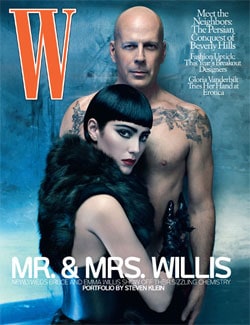 Bruce Willis gets naked for W.

Palatial Gay Fantasia: Where Simon Doonan lives. "Doonan’s picaresque journey from ration books in Reading, England, to
palatial gay fantasia is the subject of the British television show 'Beautiful People,' which was about to make its American début, on the
Logo network. The show is adapted from Doonan’s memoir 'Nasty: My
Family and Other Glamorous Varmints.' 'When the book was optioned,
everyone thought I’d start flying to work in a mink-lined helicopter,'
Doonan said. In reality, his compensation was a bit more modest; he
wouldn’t say how much he was paid, but allowed that it was 'better than
a poke in the eye with a dirty stick.'"

Dolly Parton surprises Girl Scouts with patch made in her honor. 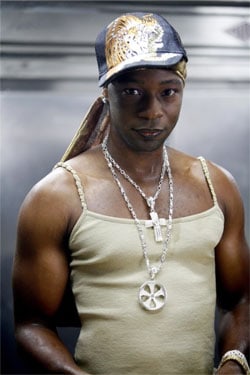 James Franco adapts homoerotic Anthony Hecht poem The Feast of Stephen for student film: "Franco pulls this together stylishly if graphically, with chests,
thighs and asses pressed tight in various permutations, infusing the
violence with the poem’s more visceral sense of ecstasy."

Houston Chronicle: Immigration law divides gay couples. "But the bill is facing heated opposition by anti-immigration advocates,
who say it could potentially lead to fraud. A strong voice in the
pro-immigrant movement, the Catholic Church, also has taken a stand
against the bill, based on the belief that marriage is strictly between
a man and a woman, said Kevin Appleby, migration policy director for
U.S. Conference of Catholic Bishops." 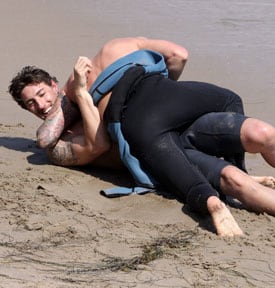 Eric Balfour does some beach rasslin'.

'Gay panic' in Connecticut leads to brutal murder: "In a seven-page confession to police released Friday, O'Brien-Veader
painted a disturbing picture of a savage killing that was preceded by a
brutal beating all intended to make Olivera suffer. The catalyst
for the slaying appears to be that O'Brien-Veader was enraged because
he thought Olivera was a homosexual and had performed a sex act on him
while the two had slept in the same bed in an abandoned factory at 835
South Main St."