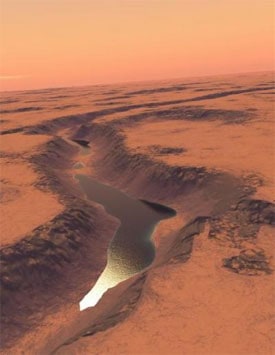 Former U.S. Senator Lincoln Chafee (RI): Gay Marriage a question of fairness. "Gays and lesbians have contributed to the diverse fabric of Rhode
Island and the rest of the country for generations, strengthening our
communities in innumerable ways…Once you acknowledge that homosexuality exists
not by choice, the next obvious step is to grant gays and lesbians the
same liberties and freedoms as every other American."

David Archuleta's dad not so innocent. 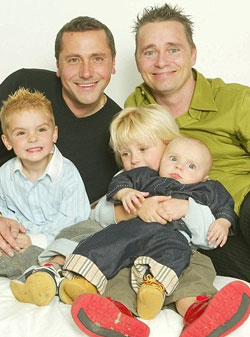 First gay couple to become fathers in the UK expecting fourth child: "Barrie and Tony Drewitt-Barlow sparked outrage when they used
donated eggs and surrogate mothers in the USA to have their
nine-year-old twins Aspen and Saffron and  five-year-old son Orlando. The
pair from Danbury in Essex, battled the American authorities to become
the first gay couple to have both their names on their children's birth
certificates. The millionaire couple revealed today that a surrogate mother is
carrying a fourth child for them, with the possibility of another twin
birth."

The merger preserves the remaining assets of PlanetOut, a once
high-flying Internet company that had struggled with losses and
debt as it ventured into offline businesses. Its shares once traded
for more than $100 apiece, but even an investment from a hedge fund
controlled by Bill Gates didn't save PlanetOut from slipping into
penny-stock status before Here swooped in to rescue it. When the
NASDAQ delisted the stock last week, it traded at 38 cents." 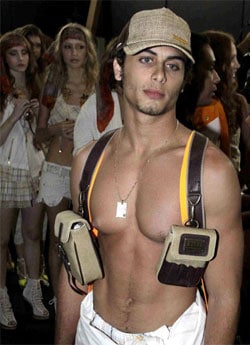 Beijing queer film festival makes progress: "The biggest change is that I'm not the only one doing this. There's more support from the gay community. Society has become more
relaxed and open-minded in its thinking."

Brian Graden says good-bye to MTV: "For me, it's time to complement my television ambitions with some new
passions already in motion – the writing of two books, making music,
creating theater, speaking on subjects that matter to me, raising
alpacas…okay, perhaps not all calls will be heeded right away. I have
no idea if I possess any of these talents, but my friends who know me
well know that these new adventures have been tapping my shoulder for a
few years."