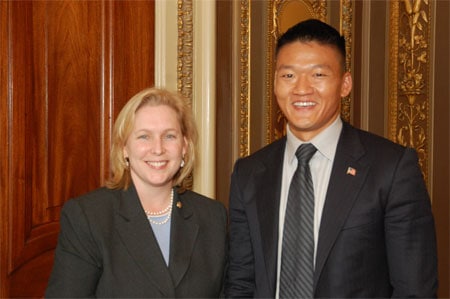 In a Huffington Post piece, Senator Kirsten Gillibrand discusses her meeting with Dan Choi and says she'll be a co-sponsor of a bill to repeal the military gay ban:

"I am firmly committed to repealing Don't Ask Don't Tell. To that end, I
am working closely with Congressman Murphy and Senator Kennedy's
offices to develop support for repeal legislation and will be among the
original co-sponsors of the bill when it's introduced. In the weeks and
months ahead, I plan to work with Lt. Choi to repair the damage that
has been done to his career and spare thousands of innocent, brave men
and women, from the same injustice."

Asian Pacific Americans  for Progress will have an exclusive web interview of Lieutenant Daniel Choi this Sunday evening at 7 PM EST (4 PM PST) via Ustream.