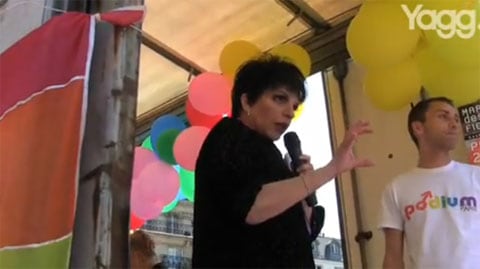 Liza Minnelli (pictured with gay Paris mayor Bertrand Delanoe, below) rode a float at Gay Pride in Paris on Saturday: 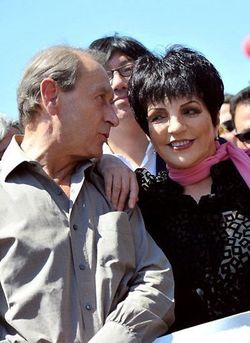 "Hundreds of thousands on Saturday marched through Paris and Berlinin flamboyant Gay Pride parades with US showbiz diva and gay icon LizaMinnelli mesmerising crowds in the French capital. Minnelli, whotakes to the stage later Saturday in the French capital, a city whichalso holds fond memories for the star of her film director father,dazzled with a brief dance routine. 'Freedom,' she cried, dancing on a float festooned with multi-coloured balloons in the gay movement's symbolic rainbow hues."

Video of Liza in Paris, AFTER THE JUMP…

The event falls 40 years after the Stonewall riots, which occurred the week followingthe death of Minnelli's mother, Judy Garland. At least one Stonewall veteranhas claimed that the two events were connected.

"All of us who knew him well really know what he was like. And I'm sure that now the accolades are going, and I'm sure whenthe autopsy comes, all hell's going to break loose. So, thank God we'recelebrating him now. He was just a really splendid man. And a brilliantperformer who changed theatrical history. And I will miss him, I cannottell you."

Video of Liza in Paris, AFTER THE JUMP…