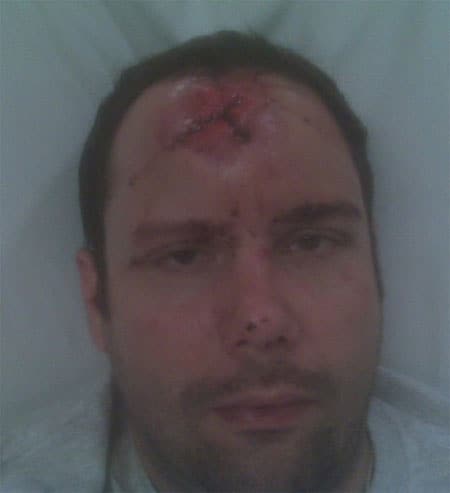 Joe Holladay, a former Village Voice sales rep, was beaten by a group of men on New York's upper east side on Saturday. The group called Holladay a "faggot" as they beat him, likely with a blunt object.

The Village Voice reports: "Holladay tells us that he walked out of John Jerome's apartment on East
85th Street between York and East End Avenues, where he'd been staying,
at about 4 a.m. to smoke a cigarette on the sidewalk, and five or six
young men swarmed him. 'It's very blurry,' he says, 'But yeah, they said 'faggot.' And the next thing I know I'm in the hospital.' Jerome, an acting coach, heard the fracas and came downstairs to
find his friend 'in a pool of blood. I thought he was dead. He wasn't
moving.' Jerome says neighbors in the building told him, and the police, that
they saw a group of five or six young white men 'with crewcuts, wearing
wife-beaters' smoking pot outside the building just before the incident
— and, drawn to their window by the noise when the beating occurred,
heard the anti-gay epithets and saw the young men pile into a car and
drive away."

Said Holladay: The mark on my forehead looks like it was made by the base of a gun."

The NYPD has interviewed Holladay and witnesses and is investigating the assault.