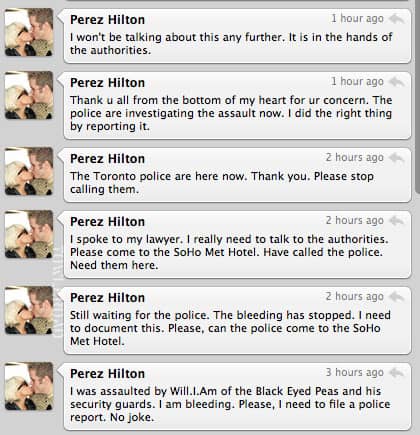 Following an after-party for Canada's MuchMusic awards, Perez Hilton unleashed a torrent of tweets claiming he had been assaulted by will.i.am of the Black Eyed Peas and his security detail, and was bleeding. The claim remains unverified.

will.i.am responded to the accusations on video channel dipdive: 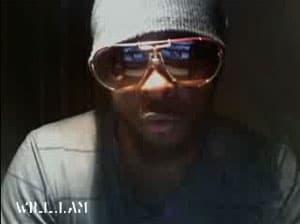 In his first video, will.i.am says Hilton disrespected Fergie, which led to a confrontation at an after-party.

"This dude walks away, I leave, and then [Hilton] says, 'You know that
was very faggot of you for coming at me like that'. I said, 'Yo dude, I
was just saying keep our name out of your mouth if you're going to be
disrespectful'. This dude says in front of a whole bunch of people and fans in Canada,
'You're a f*ggot, will.i.am'. Right, I'm like, 'Wow dude, wow, whatever'. He walks away and then one of the fans goes a little crazy and like
starts some stuff with Perez Hilton. I'm sitting minding my own
business waiting for a car, but it goes to show you how crazy things
can get. It's not that serious, it's all music and opinions. People make a career from opinions, which is cool, but don't be
disrespectful about it. And fans don't get all crazy about it. That's
all I got to say today. Tonight was a good night but it ended quite
crazy." 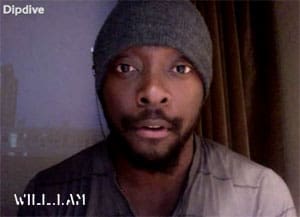 In the second video, will.i.am goes over the incident again:

"I told y'all what happened. This dude twists it and says I assaulted him when I was the one who came to him with respect and he was the one that called me a "faggot" outside the club. Whatever. I hit you Perez? Come on, dude. I didn't hit you. I told you that I didn't like the fact that you disrespected us. It's cool to have your opinion but dude, apparently you were bleeding outside the club. I was like next to you by a tree waiting for my car. Instead of calling the police you twitted that I assaulted you. Sounds like somebody wants mad attention and is not really concerned about his health. I didn't hit you and this is very wrong that you are twitting that I did that, once again disrespecting me and everything that I stand for. And they're lies. And that's wrong. Shame on you. Shame on your behavior. And that's just messed up. Peace."