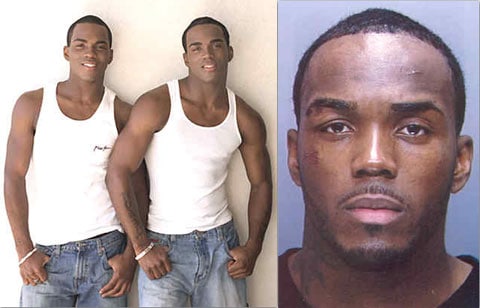 "Goffney yesterday pleaded guilty to two counts each of burglary and
criminal conspiracy under a plea deal between his attorney, Michael F.
Gushue, and Assistant District Attorney Caroline Keating. As part of the agreement, Goffney, 27, identified his twin,
Keyontyli, who is free on bail and attended the hearing, as a
co-conspirator in the burglaries. Keating alleged that Keyontyli Goffney, who is to appear in court
Aug. 6 for his role in the burglaries, served as a driver and a lookout
in the crimes. During yesterday's proceeding, she and Gushue disagreed on the
original terms of the plea agreement, which included a guilty plea with
consecutive two-to-four-year sentences. Attorneys later renegotiated the deal. Afterward, Gushue said that he and Goffney, who, he said, plans to
complete his college degree while incarcerated, were content with the
outcome. 'I think he's had an epiphany,' Gushue said. 'He's a bright young man.' Other charges, including criminal trespass, receiving stolen property and possession of an instrument of crime, were dropped."