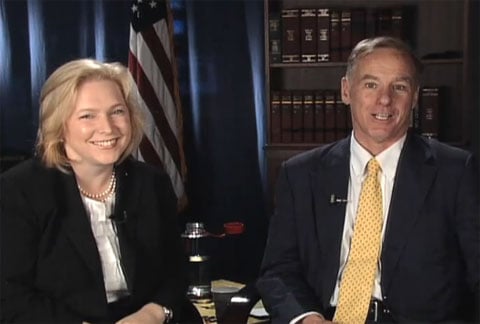 In a discussion during which he endorses her run for U.S. Senate, Howard Dean talks to Senator Kirsten Gillibrand about LGBT issues.

"And at the federal level I'm gonna work on repealing DOMA, I'm gonna work on repealing 'Don't Ask Don't Tell'. I have a bill right now that I'm considering basically putting a moratorium on the enforcement of 'Don't Ask Don't Tell' for the next 18 months so the administration has time to consider it, to decide if they want this to be part of their policy and for the military to come to the table and make their own assessments because all the evidence shows us our military has been denied some of our best and brightest in America because of this policy particularly in areas where we've really needed them in language translation and intelligence services. We need all of our best and brightest at the forefront of our operations to keep America safe."

Majority Leader Harry Reid recently said he would support Gillibrand's DADT bill, adding that he'd like to make the moratorium she proposes permanent.

I've clipped the video to the discussion of LGBT issues, but you can watch the entire clip here.