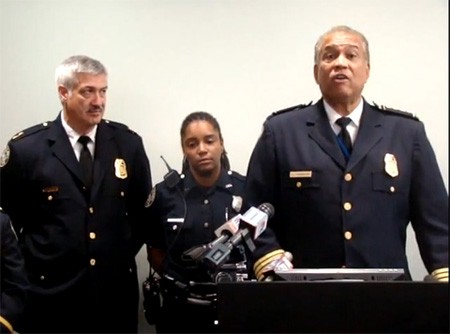 "One man said officers grabbed patrons who didn't immediately lie downby the neck and forced them to the ground. The man said he was kickedin the ribs while lying down. 'Then I heard laughing and giggling andsaying this is more fun than raiding niggers with crack. They also toldus to shut the fuck up unless we were spoken too [sic].' The man saidhe heard one person told that if he spoke again he would be hit by achair. He also reported that one officer 'said to everyone in generalthat all you all do is flash your asses and show your cocks.'"

"Another patron described listening to officers chat about their cellphone plans as he lay on the ground. 'I was forced down by physicalforce. They grabbed my neck and pushed me down. They put their boot onmy back and told me to stay down. … If anyone asked anything they weretold to 'shut the fuck up.''"

"Another patron said he saw officers forcing people to the ground byofficers pushing their shoulders or the backs of their heads. He saidhe asked to move because there was broken glass on the floor where hewas lying, and he was told to 'shut the fuck up.' The customerrecounted hearing anti-gay slurs: 'I heard several slurs such as 'Ihate homosexuals.' I also heard 'I don't like fags.' One officer askedme if I was married and had any children, and he told me I should beashamed for being there." The customer recounted having his diabetesmedication, which was in an unmarked container, taken and not returned.He recounted hearing another customer told that if he didn't be quiet,an officer would hit him over the head with one of the barstools. 'There were several officers standing over me that started joking aboutthis is a lot of fun, we ought to come back and do this every week.'The customer said he heard an officer say pictures of men on the wallsmade him sick, and make comments about people's appearance, includingcalling him 'big boy.' He also said officers were watching the footballgame on TV during the raid."

More at the Southern Voice…

Your blood boiling yet? Here's part of Atlanta Police Chief Richard Pennington's press conference on Monday regarding Atlanta Police Officer Dani Lee Harris, the force's LGBT liaison, who was MIA during the raid. "Says Pennington: We really should have had her involved in this."

The LGBT liaison? Ya think?