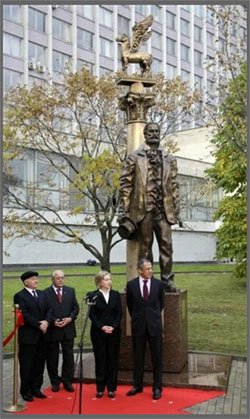 Clinton disappoints gay activists in Moscow by not decrying anti-gay abuses of Mayor Luzhkov at Walt Whitman statue unveiling, but does urge Russia to respect human rights and the democratic process: "In an innovative society, people must be free to take unpopular
positions, disagree with conventional wisdom, know they are safe to
challenge abuses of authority."

House Minority Leader John Boehner thinks sexual orientation is not an immutable characteristic, and that's why he opposes hate crimes legislation that includes it.

Navy considers allowing women to serve on submarines: "Some sailors and wives warn that putting men and women together in
extremely close quarters underwater for weeks at a time is just asking
for sexual harassment cases and wrecked marriages. But supporters of
the idea say it is a matter of fairness and equal opportunity, and what
worked on ships can work in subs."

Last-minute donations pour in for Referendum 71 in Washington: "The campaign in favor of R-71, called Washington Families Standing Together, now has nearly $1 million in the bank. Big
donations include $60,000 from a special fundraising committee set up
by the Human Rights Campaign, the nation’s largest gay rights group.
Microsoft Corp. CEO Steve Ballmer and co-founder Bill Gates each gave
$25,000. The campaign against R-71 also has some last-minute
donors. A relatively new committee called Vote Reject on R-71 has
collected about $200,000 from the Family Policy Institute of
Washington, a Lynnwood-based conservative religious group." 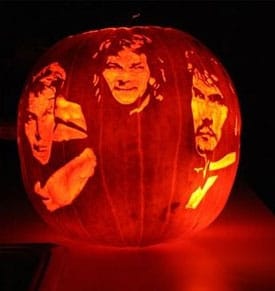 Patrick Swayze gets a memorial jack-o-lantern. 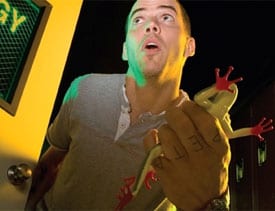 Steve-O stands up for frogs.

Senator Olympia Snowe, the sole Republican vote on the Senate Finance Committee which approved the health care bill yesterday, says any final bill that includes a public option won't get her vote.

Make love on a real train and get crabs while you're at it.