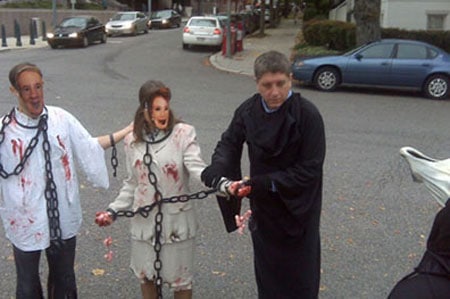 "Today, he and his followers are on Capitol Hill 'with signs and costumes, talking to House Staffers as they enter work,' and they plan to visit Pelosi 'and discuss with her child-killing in healthcare and ‘the wrath to come.’'"

EArlier this week, Terry launched a contest to see who could produce the best "Nancy Pelosi and Harry Reid BURN IN HELL video". He also produced a video on the topic.

Previous Post: « Chaz Bono Shaving His Face for the First Time
Next Post: Canadian Lesbian Who Was Attacked in Front of School, Kids, Testifies »