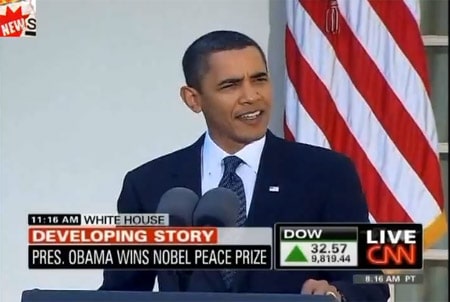 Said Obama to reporters this morning:

"I am both surprised and deeply humbled by the decision of the Nobel Committee. Let me be clear: I do not view it as a recognition of my own accomplishments, but rather as an affirmation of American leadership on behalf of aspirations held by people in all nations.To be honest, I do not feel that I deserve to be in the company of so many of the transformative figures who've been honored by this prize — men and women who've inspired me and inspired the entire world through their courageous pursuit of peace.But I also know that this prize reflects the kind of world that those men and women, and all Americans, want to build — a world that gives life to the promise of our founding documents. And I know that throughout history, the Nobel Peace Prize has not just been used to honor specific achievement; it's also been used as a means to give momentum to a set of causes. And that is why I will accept this award as a call to action — a call for all nations to confront the common challenges of the 21st century."