In a new column in The Advocate, Michelangelo Signorile notes the divide between the grass roots and the Human Rights Campaign evidenced by action that has been taken by the administration only when pressure has been applied. He also has some suggestions for HRC: 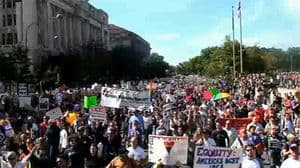 "The group has its work cut out for it — both in trying to bridge the
divide between the organization and much of LGBT America and regaining
the trust it needs from the grass roots and the Net roots if it wants
to work together. It can start by really representing the mainstream
LGBT thinking on Obama and his promises instead of heaping praise on
the president and falling back on its access-at-all-costs strategy,
which has never worked. And HRC should acknowledge to the White
House that the grass roots is very organized, isn’t happy, and will be
marching again. HRC can be a facilitator of that truth rather than
apologizing for the administration. Rather than looking increasingly
irrelevant, our big D.C. lobbying group could actually make itself look
much stronger."