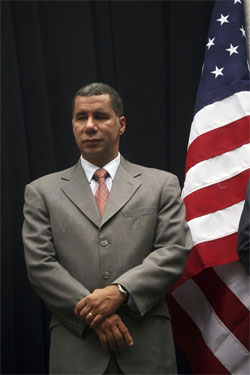 "Paterson said he expects the state Senate to give the measure finallegislative approval in weeks ahead and then he will sign it, makingNew York the seventh state to legalize same-sex marriage. Patersoncan't force the Senate to take up the bill and admitted to reporters hecan't guarantee its approval, but he says he's now confident it willpass, as advocates and sponsors of the bill in Albany have been quietlyworking to build support. The bill was blocked by a summer coupin the Senate in the final days of the regular session in June. TheDemocrat-led Assembly has already passed the measure. Paterson'sstatements Thursday came at the fall dinner in Manhattan of theinfluential gay rights group Empire State Pride Agenda. He said NewYork will have marriage equality 'as a result of a law we will pass inthe New York Senate, already passed in the Assembly, and will be signedby the governor, just in the next few weeks.'"

"Tonight I say the time for making cases is past…The time for petty partisan finger pointing is past. The time for lameexcuses, for botched maneuvers and simple, plain old foot dragging ispast…The time to get this bill to the floor of the New York stateSenate is now. The time for the state Senate to acknowledge ourexistence is now the time for us to hear our lives – our lives! -debated on the floor of the New York state Senate is now…Sen. John Sampson, you’re the leader of the state Senate. Sen. TomDuane, you have told us on multiple occasions that you have the votesto pass this bill. Give us the dignity the rights and the respect wedeserve bring this bill to a floor for a debate and a vote. If we winlet us celebrate and if we go down we know what we need to do in 2010.Period."

Paterson's remarks (via Good As You), AFTER THE JUMP…