Elizabeth Benjamin reports in the NY Daily News on a conversation she had with New York state senator Pedro Espada Jr. and a plan he floated that could plausibly derail the marriage equality vote: 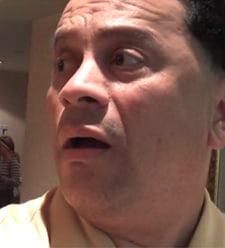 "Espada suggested linking the marriage bill, which Gov. DavidPaterson has put on the calendar for Tuesday's session, with the farmworkers' rights bill that he (and the DN) have been championing for some time.

"Sen. Pedro Espada is linking the two, and I am writing tothe governor, dismayed as I am that migrant workers is not on, and Ithink there's probably more support for that," the majority leader toldme, lapsing into that rather odd habit he has of referring to himselfin the third person.

For those trying to get a read on whether the marriage bill willcome up for a vote Tuesday, this cannot come as good news. It seems tobe that Espada is setting himself up with an out should the bill cometo the floor – or, at the very least, an excuse for voting 'no'.

It's going to be touch and go on marriage until right up to themoment the Senate Democrats come into the chamber on Tuesday. In fact,it's possible they might simply gavel in and gavel out again withoutdoing anything at all, depending on where negotiations stand.

Video of Espada, AFTER THE JUMP…