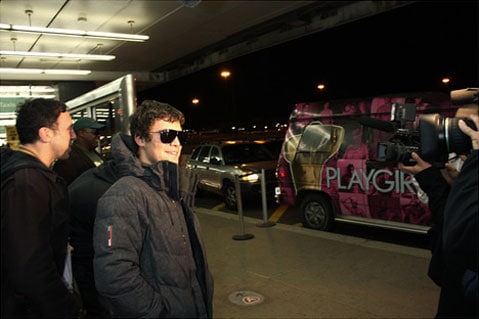 Levi and his johnson arrive in NYC for their close-ups. 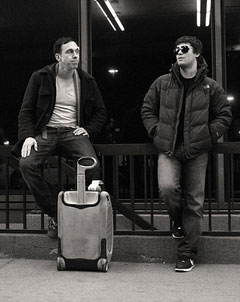 Meeting Johnston at the airport was Playgirl consultant and NYC nightlife promoter Daniel Nardicio, whose conquest of Levi was detailed this week in The Daily Beast:

“At first, Nardicio hoped the photographer Terry Richardson (who is
known for his oversaturated eroticized pictures) might be available to
do the Johnston pictorial, but the assignment went to photographer Greg
Weiner instead. Nardicio is particularly pleased with the serendipitous
pun. ‘His name is actually Greg Weiner!’ he beams. ‘That’s the funny
thing.’

And Nardicio’s already begun scouting locations for Johnston’s shoot
at locker rooms and ice hockey rinks, which was leaked to Gawker,
earlier this week. Then, on Thursday, The New York Post’s Page Six ran
an item suggesting the boy from Alaska might be “worried about how his
manhood may look” in such an chilly environment.

Nardicio says the story was ‘total bullshit,’ though he admits he
hasn’t actually seen Johnston naked nor has he asked his
representatives about the size of the goods. ‘I don’t think it’s
appropriate,’ he says. ‘I ask models [for a look], but they’re not
famous. When they’re famous, I’m not going to worry about it. We
wouldn’t turn away Levi if he had a small penis.'”

Previous Post: « Espada Setting Himself Up with an Out on NY Marriage Bill?
Next Post: Health Care Bill Provision Would Fix Unjust Tax Laws for Gays »