Marriage warrior Karl Rove has been granted a divorce in Texas, and the family wants its privacy respected: 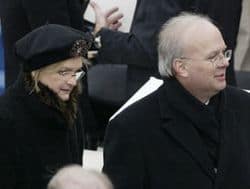 "A family friend told POLITICO: 'After 24 years of marriage, many of
which were spent under incredible stress and strain during the White
House years, the Roves came to a mutual decision that they would end
the marriage. They did spend Christmas together with their son, and
they plan to spend time together in the future. They maintain a strong
friendship, and they both feel that that friendship is a source of
comfort and inspiration for their friends and family.'

So it's Bush's fault?

Said spokeswoman Dana Perino: “Karl Rove and his wife, Darby, were granted a divorce last week. The couple came to the decision mutually and amicably, and
they maintain a close relationship and a strong friendship. There will
be no further comment, and the family requests that its privacy be
respected.”