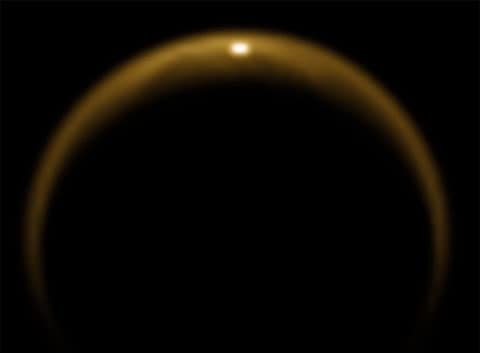 A shining glint in a photograph shot by the Cassini probe confirmed to scientists that Saturn's moon Titan has surface lakes:

"Cassini has been looking for this mystical glint since reaching Saturn in 2004, but winter had shrouded the northern half of Titan. The sun began shining on this area, which contains more lakes than the southern hemisphere, in August 2009 during the moon’s spring equinox.

The glint comes from the southern shoreline of the sprawling Kraken Mare lake, which covers about 400,000 square kilometers of Titan’s surface. The image proves the lake has been stable for at least three years, indicating that Titan cycles liquid methane to its surface, said Ralf Jaumann, Cassini team member at the German Aerospace Center in Berlin, Germany."