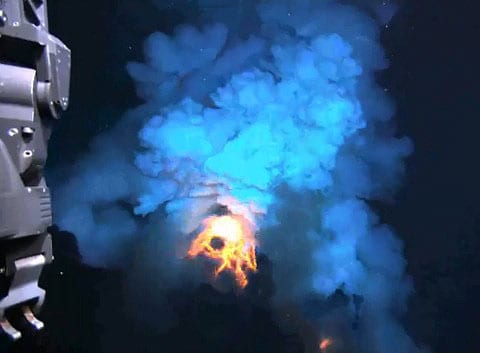 Scientists have observed and filmed a volcano erupting 4,000 feet below the ocean's surface for the first time ever:

"A submersible robot witnessed the eruption in May during an underwater expedition near Samoa, and the high-definition videos were presented Thursday at a geophysics conference in San Francisco…Earth and ocean scientists said the eruption allowed them to see for the first time the creation of a material called boninite, which had previously been found only in samples at least a million years old.In the past, boninite lavas had only been found on extinct volcanoes, so researchers were excited to see firsthand how they are created."

Said Joseph Resing, a chemical oceanographer at the University of Washington: "When we got there, we put the sub down, and within in an hour and a half we found an eruption there in its full glory. We haven't seen this before. And now for the very first time, we see molten lava flowing on the sea floor."