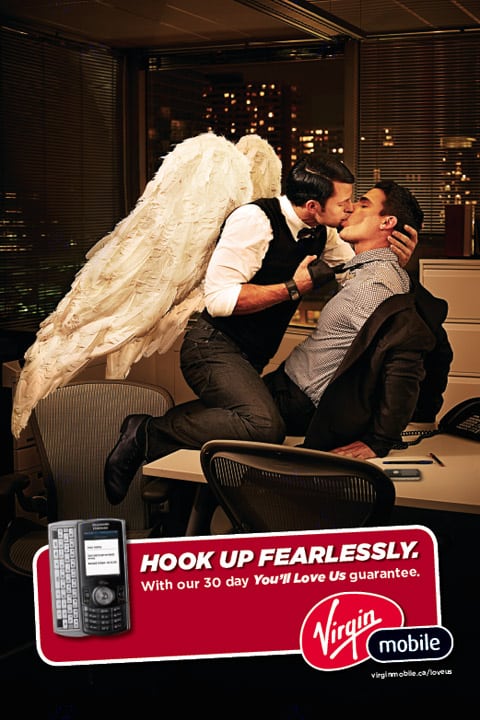 UPDATE and CORRECTION: Virgin Mobile Canada has contacted from us. According to them the tip I received on this was incorrect and the only ads that ran in Calgary were the heterosexual ones. Two of them were pulled down however. Apologies for the error.

In December I posted about this ad campaign from Virgin Mobile Canada. It's being pulled from bus stops in Calgary for fear the children might see it. A similarly-themed, heterosexual ad will remain on the bus stops:

A third Virgin Mobile ad, which features a man and woman kissing with his hand on her clothed thigh, has been deemed acceptable and will remain, said Collins. 'The two that we've removed were a little bit too provocative,' he said.

Virgin Mobile spokesman Nathan Rosenberg said the company is surprised by the reaction. 'It's quite interesting for us because these are the sorts of images people are bombarded with every day,' he said.' We don't think that we're actually doing anything that encourages people not to express their love in a healthy relationship or in a healthy kind of way.'"

I can't seem to find the straight image from the campaign online – can anyone point us to it?

UPDATE: The ad that will remain up, below. Thanks readers. 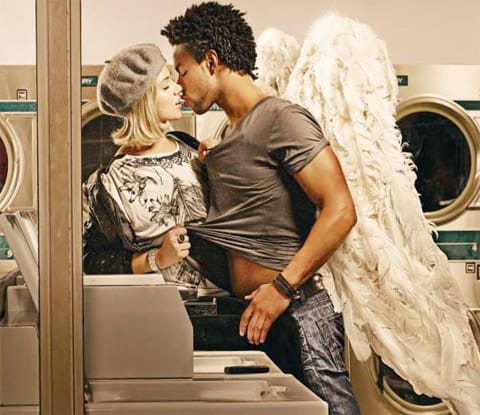