Over the last week a scandal involving homophobic Evangelical Northern Ireland MP Iris Robinson, about whom I've written many times on Towleroad, has been unfolding. If you haven't read about it yet, here are the main points. Click through the links for much greater elaboration than I can provide. 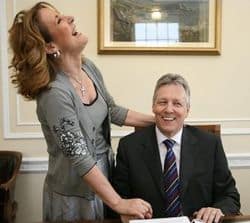 In June 2008, Robinson called homosexuality an "abomination" while discussing a homophobic attack on a man in which she also suggested that gays should seek therapy to "turn them around".

The recent scandal began when Robinson announced she was stepping down because of her mental health. Then, there was an admission she had an affair with a 19-year-old named Kirk McCambley to whom she funneled $80,000 in secret loans from property developers to finance his investment in a cafe near Belfast.

Watch a recent report on "The Beginning of the Affair" from the BBC, AFTER THE JUMP…

It appears that the whole affair and scandal has the potential to bring down the entire government, as Robinson's husband is the province’s unionist first minister, the NYT reports:

The revelations come at a critical time, when the mostly Protestantunionists and mostly Catholic republicans are in increasingly bitterdiscussions about how to put in place one of the last and mostdifficult pieces of the United States-brokered power-sharing agreement:the transfer of police and justice powers in the province from Britishofficials to the unity government.

The transfer would be a stepof historic significance for republicans, who viewed the police as aparamilitary arm of the unionists during the 30 years of “the troubles”that left 3,500 people dead. But it raises alarms among unionists, whofear that their republican partners will not adequately pursue andpunish dissident republicans who have rejected the unity government andmounted a deadly campaign of bombings and assassinations in recentmonths.

Mr. Robinson’s fate is crucial to the future of theagreement; as negotiations have dragged on months beyond the deadlinefor transferring police power, both sides have become more entrenchedin their positions. If Mr. Robinson were forced from power, analystssay, there would be little chance of any new unionist leader riskingthe wrath of his followers by moving ahead with the deal. 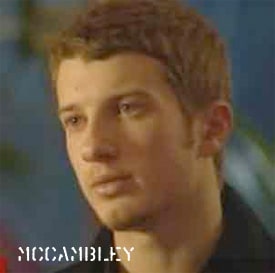 In related news, Gay UK activist Peter Tatchell said, "I’m sorry for the pain that Iris Robinson has suffered but she’s ahypocrite. Even now, despite her own adultery, she expresses no regretfor her harsh, judgemental moralising against gay people. She is sadand two-faced. It is terrible that Iris Robinson has been driven to attempted suicideand a mental breakdown. I feel very sorry for her. But it is a greatpity that this painful experience has not softened her heart towardsthe suffering of lesbians and gay men. Even now, she expresses no regret for her harsh, judgementalmoralising against gay people. Iris seems as unforgiving as ever. She’sstill unrepentant about her homophobia.”

And the UK's gay magazine Attitude wants Robinson's then 19-year-old lover on its cover: "Kirk is incredibly hot and we’d love to see him on the cover ofAttitude. We think our readers would go as wild for him as Irisobviously did. We’d love for him to get in touch. We’ve put in a fewcalls to the Lockkeeper’s Inn but no one has answered the phone."

Watch a recent report on "The Beginning of the Affair" from the BBC, AFTER THE JUMP…