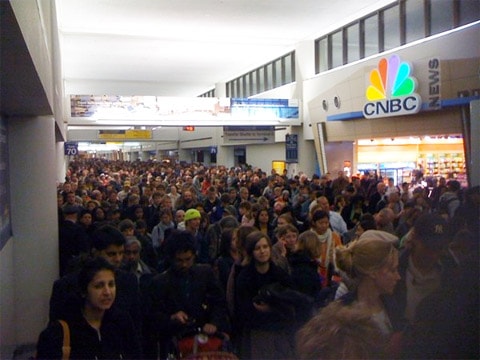 This was the scene yesterday at Newark airport (via twitter) after a nitwit crossed the exit lane between the public and secure area:

"Officials took the action after a man was observed walking the wrong
way down the exit lane between the secured, or 'sterile,' area and the
public area at around 5:20 p.m. The Transportation Security Administration
initially responded by stopping screening. But about two and a half
hours later, the T.S.A. ordered all passengers on the sterile side to
move back to the public side for rescreening. While it was
unclear who first alerted authorities to the potential breach, the
individual was not an employee of the T.S.A., which is in charge of airport security, said an administration official. People
were allowed to begin boarding planes again just under seven hours
after screening was first shut down, and the T.S.A. expected all
passengers to be rescreened by 12:30 a.m. on Monday. Officials did not
locate the man who caused the alert."

Who's winning the war on terror?

"The situation caused significant disruption at the airport. With
flights having been grounded after several hours, and planes bound for
Newark severely delayed because there were no gates available at the
terminal, Continental announced that passengers scheduled to fly into
or out of the airport on Sunday and Monday could reschedule trips
without penalty. Officials estimated that thousands of people were
affected."