Several days ago, MP David Bahati, the sponsor of Uganda's "kill the gays" bill, announced he was coming to Washington D.C. to attend the National Prayer Breakfast in February with President Obama and faith leaders. 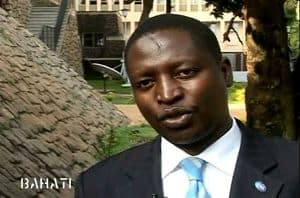 Warren Throckmorton says it's not happening:

Bahati was invited months ago to come to Washington DC only as a volunteer and not to attend the NPB event. According to these sources, Bahati declined the invitation prior to introducing the Anti-Homosexuality Bill. According to Mr. Hunter, the Monitor article and Bahati’s statements came as a complete surprise to the NPB officials here. However, in the event the article was accurate, the NPB officials and Congressional leaders were taking action to assure that Bahati did not come to any of the meetings.

Throckmorton received confirmation of that from NPB spokesman Richard Swett:

Ambassador Richard Swett, a longtime associate of the Fellowship Foundation since his days in Congress in the early ‘90s, confirmed the accuracy of Mr. Hunter’s report to Warren Throckmorton. He went on to state, “The National Prayer Breakfast is an organization that builds bridges of understanding between all peoples, religions and beliefs and has never advocated the sentiments expressed in Mr. Bahati’s legislation.”

Previous Post: « John Mayer: ‘Before I Make Coffee, I’ve Seen More Butt Holes Than a Proctologist Does in a Week’
Next Post: Outrage Director Kirby Dick Responds to Awards Snub:
‘Isn’t it Time for GLAAD to Stop Protecting the Closet?’ »