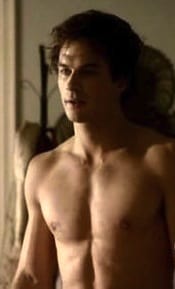 Entertainment Weekly has published an interview with Jennifer Bryan, the costume designer behind CW's very Twilight-esque nighttime soap, The Vampire Diaries. A good chunk of the article focuses on explaining the how's and why's of the plethora of scenes starring Paul Wesley and Ian Somerhalder sans torso attire.

Here Bryan discusses what goes into choosing certain t-shirt brands for the actors:

Entertainment Weekly: "Do you ever have weird moments on the set where you havePaul trying on different shirts to see which one is going to come on oroff easiest?"

Bryan: "I do, actually. It depends on the weight of the fabric, and it hasto fit a certain way so if he’s pulling it off on-camera, it’s notawkward. It doesn’t look like a three-year-old trying to get out of asnowsuit. It’s done with a lot of grace. [Laughs]

There are some shirts that we’ve discovered are a great fit forthose guys. I’m a huge fan of John Varvatos, the cuts on their shirtswork great on Ian. There’s an episode where Stefan stabs Damon, andDamon says, “Damn, that was John Varvatos.” Like, “You ruined my JohnVarvatos shirt.” We actually used the label in the dialogue because itactually was a John Varvatos shirt that he had on. We use Ben Sherman,a T-shirt line called Alternative. We also like some Converse and Bossshirts. We do Diesel jeans and Levi’s."

If you ask me, that's a perfectly good reason to ruin a John Varvatos shirt.

A sampling of the show's abundant shirtlessness, AFTER THE JUMP.