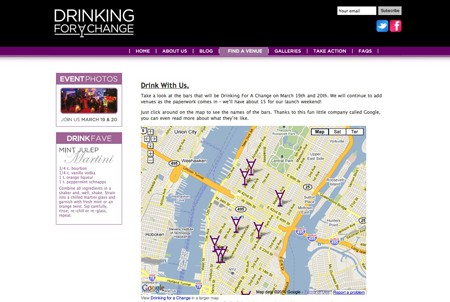 Peter Dunn at 'Drinking for a Change' writes us: "On March 19th and 20th, fifteen of the most popular gay and lesbian bars across the city will be Drinking for a Change and encouraging patrons to donate a-dollar-a-drink to LGBT-focused not-for-profits. By focusing on small donations on a mass scale, Drinking for a Change aims to engage a greater portion of the LGBT community and its allies around the causes that matter to them. Their first weekend on March 19th and 20th will collect a dollar-a-drink for The Empire State Pride Agenda, The Ali Forney Center and the Callen-Lorde Community Health Center, three prominent LGBT-focused not-for-profits in New York. With no paid staff and minimal expenses, nearly one hundred percent of the money collected will go directly to the charities.

Said Kevin Forsyth the group’s founder: "The idea Drinking for a Change was inspired by the Church, quite frankly. Faith-based donations played a huge role in passing Prop 1 in Maine and Prop 8 in California, which stripped marriage rights away from same-sex couples. Every week, you give your five dollars. Whether it goes to fixing the roof or fixing America's morals is irrelevant, you just know your beliefs and lifestyles are being protected. Why can't gay people and their friends have that? We may not have gay church, but we do have gay bars."