Q Let me get back to the question. So there was the heckling on Monday night, there's the veterans yesterday at the White House gates handcuffing themselves to the fence. All of these actions are aimed at getting repeal this year, something the White House has sort of declined to commit to since the State of the Union address. Has the White House misjudged the level of patience among LGBT and grassroots activists on this?

MR. GIBBS: No. Again, I would remind anybody on this issue — look, first of all, I will say this. Obviously the President made a commitment in the presidential campaign, and understands the passion that people hold the belief that all should be able to serve. The President holds that belief too.

The President has made and is committed to making this changed law. I don't think he's underestimated the — as you said, the patience of some. The President wants to see this law changed, just as you've heard the Chair of the Joint Chiefs and others in the military say that it's time for that change to happen.

MR. GIBBS: Yes. The President has set forward a process with the Joint — the Chair of the Joint Chiefs and with the Secretary of Defense to work through this issue.

MR. GIBBS: Well, again — the House and the Senate are obviously a different branch of government. The President has a process and a proposal I think that he believes is the best way forward to seeing, again, the commitment that he's made for many years in trying to — changing that law. 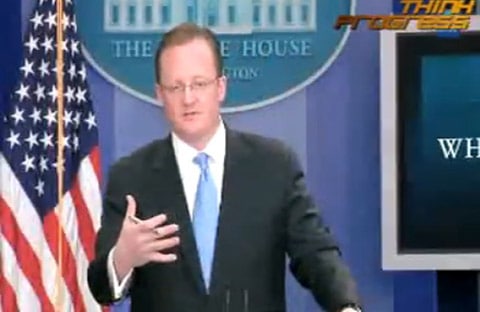 At a White House press briefing today, Press Secretary Robert Gibbs indicated that the President is committed to waiting for the Pentagon to finish its "study" on "Don't Ask, Don't Tell" before actively pushing for repeal, effectively pushing it into 2011.

So, while the repeal could conceivably be attached to a Department of Defense authorization bill to be considered next month, in line with the President's promise made in the State of the Union address, this is the clearest indication yet that no support will be coming from the White House on that.

Transcript, and video, AFTER THE JUMP…

The hopeful news is that there are a growing number of Democrats in Congress who say they are unwilling to wait for the lengthy military study, as evidenced by Senator Udall's statement I posted earlier today.

David Mixner reports: "I have spent the day visiting on the phone with extremely reliable sources on Capitol Hill in both the Senate and House. With over twenty calls, I have been able to determine that the revolt is perhaps much larger than the media realizes. There is a sense of total frustration with the administration. They just don't understand why the White House won't move on this issue. Many of persons on the Hill that I spoke too are from states with large urban populations, including in the South. They feel the failure to vote this year on DADT will have a 'chilling effect' regarding voter turn out in the Fall elections. Those interviewed think that not only will many LGBT citizens stay home but also other progressives."