Here's something new. Pennsylvania State House candidate Babette Josephs says her opponent Gregg Kravitz is pretending to be bisexual to court the gay vote, so she outed him as straight. 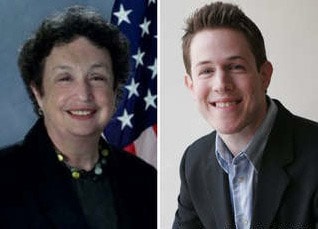 "Veteran Rep. Babette Josephs (D., Phila.) last Thursday accused her primary opponent, Gregg Kravitz, of pretending to be bisexual in order to pander to lesbian, gay, bisexual, and transgender voters, a powerful bloc in the district.

'I outed him as a straight person,' Josephs said during a fund-raiser at the Black Sheep Pub & Restaurant, as some in the audience gasped or laughed, 'and now he goes around telling people, quote, 'I swing both ways.' That's quite a respectful way to talk about sexuality. This guy's a gem.'

Kravitz, 29, said that he is sexually attracted to both men and women and called Josephs' comments offensive.

'That kind of taunting is going to make it more difficult for closeted members of the LGBT community to be comfortable with themselves,' Kravitz said. 'It's damaging.'

But others said the remarkable quarrel itself was a sign of progress."

Listen to the audio here.