Immediately following congressional mark-ups on the National Defense Authorization Act 2011, Captain James Pietrangelo and I will commence a fast in pursuit of Equality and Dignity. We have three demands of President Barack Obama.

This action is not organized in the name of any organization.

As you may recall, Pietrangelo has joined Choi in previous acts of civil disobedience, chaining themselves to the White House fence on March 18.

"In response to the United States Senate and the House of Representatives voting on the repeal of Don’t Ask Don’t Tell, forces are mobilizing for non-violent direct action and civil disobedience. Veterans are ready to spend Memorial Weekend in prison. Fasting will also commence. The simple demands are (1) End DADT firings. (2) Enact non-discrimination. (3) End the insulting, wasteful study. The community knows that the President does have within his power to end the discharges immediately. The President has not responded authentically in ending the firings and inherent discrimination. This has set into place a call to action that can no longer be ignored. It is going to met with the same degree of seriousness that it brought on the lives of those living under DADT. It is a matter of life or death which will be honored through civil disobedience and fasting. This is a formidable call to conscience which invites all to stand in Equality and Dignity."

Choi has been critical of the so-called "compromise" on "Don't Ask, Don't Tell", calling it a "delay".

Choi criticized Obama's lack of leadership on Tuesday night's Joy Behar Show on CNN. Choi also posted a YouTube video with some of his thoughts. 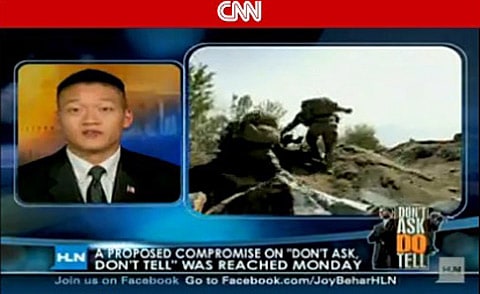