Florida Attorney General Bill McCollum, whose campaign Facebook account was bombarded with negative comments last week after it was revealed that "ex-gay" right-wing hypocrite George Rekers was paid more than $100,000 to defend the state's gay adoption ban, is now distancing himself from Rekers and the "rent boy" scandal. 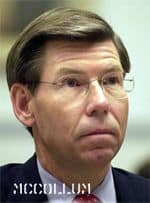 Said McCollum to Naked Politics: "I will not do it again. I think our team’s done what it should do. We’ve been defending the constitution of the state and we’ve been representing the Department of Children and Families, who hired him and paid him and needed expert witnesses and he was available and credentialed. I wouldn’t do it again if I knew what I know today but I didn't know that then and neither did anybody else."

The paper adds: "McCollum spokeswoman Sandi Copes called to clarify: 'They have paid him but we did select him, executed a contract that DCF approved,' Copes said. 'We selected him, they paid for him.'''