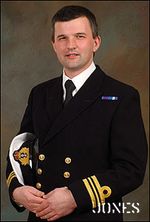 Today they write a joint editorial in Politico discussing some of the additional ways that the U.S. Military's discriminatory policies against gay people are hurting it:

"The U.S. armed forces are the world's most formidable, with an unrivaled might, and a readiness to accept worldwide deployments to engage in a range of military conflicts that no other nation views with the same sort of international responsibility.

Yet it is also true that U.S. military power depends, in most cases, on an international coalition of partners. Members of Congress don't always seem to appreciate that America's allies are put off in serious ways by the "Don't ask, don't tell" policy.

For example, units of our own or other armed forces have refused to deploy in some joint operations with U.S. forces, because gay service members would not work with the Americans — for fear of hostile reactions.

In addition to protecting our men and women from enemy combatants, we must also protect them from anti-gay and anti-lesbian discrimination.

Increasingly, this is not a situation we and our personnel will tolerate. So we are less able to help accomplish our collective missions."