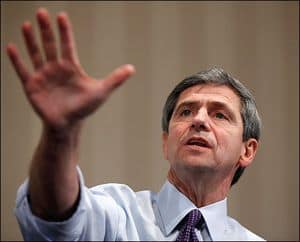 "Specter switched his party allegiance last year to salvage his career, but the Democratic primary electorate preferred Rep. Joe Sestak as its nominee. With 65 percent of precincts reporting, the two-term congressman had 53 percent of the vote to Specter’s 47, according to unofficial results. The Associated Press called the race for Sestak, according to MSNBC, which also projected that Sestak will win.

Sestak's win over Specter is all the more surprising because it came despite the Democratic establishment going firmly for the senator. President Barack Obama helped him raise money, appeared in his TV commercials and lent his voice to a robocall. Vice President Joe Biden also campaigned for Specter."

The WaPo notes that Sestak followed the same path that allowed Hillary Clinton to win the Pennsylvania primary over Obama.

Margaret Carlson in Salon credits a campaign ad for the Sestak win:

"His late surge owes a lot one of the most brilliant ads ever made, one vividly showing Specter's double life being warmly endorsed by two presidents of opposite parties. In it, we see Bush calling Specter a team player he could count on, clasping his hands; Sarah Palin and former Sen. Rick Santorum have cameos. In the other ad, we see Obama shouting out the love and intoning, "You know he's going to fight for you." … In the end, Specter turned out to be a double incumbent in a year when it is better to be an incumbent of no party at all. Sestak held his fire until the end. By the weekend, Specter was begging for White House help and he got none, despite Obama being next door in Youngstown, Ohio and Biden in his backyard speaking at the University of Pennsylvania in Philadelphia."

"Paul, the son of former presidential candidate U.S. Rep. Ron Paul, on Tuesday gave a tea party activist a key win in a statewide election that could embolden the fledgling political movement in other states. With 43 percent of precincts reporting, Paul was leading with 60 percent to Grayson's 36 percent.

'It's just a tremendous mandate for the tea party,' Paul said. 'It cannot be overstated that people want something new; they don't want the same old, same old politicians and I think they think the system is broken and needs new blood.'"