Everything changed that day. My evaluation scores began to drop dramatically — from the 4.9 out of 5 average I had for three years to a 1.0. After obtaining copies of my evaluations, I learned that my direct supervisors’ scores had been crossed out and lowered by the gunnery sergeant. I had never failed at anything in life before and I was not going to let anyone tell me I was not a good Marine.

My only way out, I believed, was to transfer out of my unit. At first my requests were repeatedly denied. Eventually though, after numerous letters of recommendations from other military officers, I was transferred.

I was promoted and, when I left my new unit, I had numerous letters of recommendation. The detachment’s commanding officer wrote accolades such as, “You are a Marine with exceptional core values… a great asset to the Armed Services” and “You are a Marine of great caliber and will go far in your military career.”

Unfortunately, I was required to return to my former training squadron just months before my six year contract was up. I was back under Gunny’s command. Those last few months were a living nightmare. I constantly dreaded going to work and was afraid for my physical safety.

With the support of friends, I managed to serve eight years. I love the Marines and, under different command circumstances, I would have continued my service. In three weeks, I’ll graduate from the University of California, San Diego with a degree in structural engineering. With the your help and with open service in place at the Pentagon, I’d signup and serve my country again.

Mr. President, thank you for supporting repeal of “Don’t Ask, Don’t Tell.” I hope that, with your leadership, no other service member will have to go through the persecution I endured in order to serve our country. 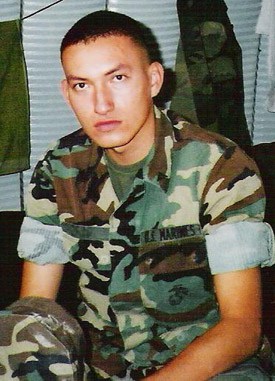 As an 18-year-old, first generation immigrant from Mexico and a newly sworn in American citizen, military service seemed the best way to repay my fellow citizens for giving my family and me a shot at a better life.

I enlisted in the Marine Corps as an Aircraft Ordnance Man. USMC Boot Camp was physically and mentally challenging, but it didn’t compare to the persecution I would encounter later in the Marines.

As a new PFC in an Aircraft Ordnance (AO) Shop in California, I developed a reputation for being a hard worker, always looking for extra duties and opportunities to expand my skills. As a result, my work ethic and excellent evaluations, I was promoted to an E3, a lance corporal. These were my best days in the military. Unfortunately, they were short numbered. With the arrival of a new gunnery sergeant, my career in the Marines soon became a struggle to survive.

The gunnery sergeant enjoyed socializing with the junior Marines in the shop, frequently taking them out drinking and to the strip clubs. I was expected to participate. I tried to be a team player so I would not be singled out. The shop soon became the squadron’s “frat pad.” Most conversation revolved around girls and hookups, often described by my comrades as “bitches and hoes.”

This behavior, beyond being tolerated, was often sponsored and enjoyed by my superiors. “Gunny” usually joined in, bragging about cheating on his wife. This environment was repulsive and contradictory to the core values of the Marine Corps: honor, courage, commitment — values I tried to live by. I was miserable, but felt powerless to do anything about it.

I still went out drinking with the guys, but tried to avoid going to strip bars or swapping stories about sexual experiences. But then Gunny became suspicious. He told me he suspected I was a “faggot” and that we should see what the rest of the guys thought about it.