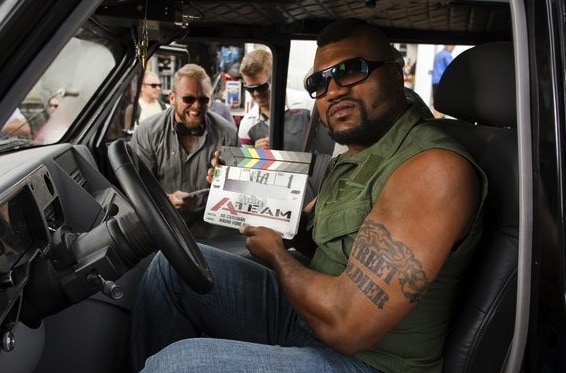 That's what Quinton "Rampage" Jackson told a reporter from the Vancouver set of the big-budget Hollywood summer remake of The A-Team. The UFC fighter takes over the role of "B.A." Baracus made famous by Mr. T.

"Acting is kind of gay," Jackson said. "It makes you soft. You got all
these people combing your hair and putting a coat over your shoulders
when you're cold. I don't want a coat over my shoulders! I'm a
tough-ass [individual]!"

"Vancouver strikes me as a San Francisco-kind of place," he continued.
"And I don't want [individuals] getting ideas about me. I feel in my
heart I'm the toughest [individual] on the planet. And I don't want
nothing changing my train of thought. If you don't believe that when we
step inside the octagon, it shows."

The article also makes mention of an altercation between Jackson and a crew member on the set: "…a movie crew member had wandered in on this final day of principal
photography and — whether jokingly or not — called the muscle-bound
movie star a homophobic epithet. Jackson had responded with barely
contained fury. He threw the guy out, shouting him down with every
conceivable gay slur."

You may remember that Mr. T himself was involved in a controversial Snickers commercial that many critics attacked as homophobic.