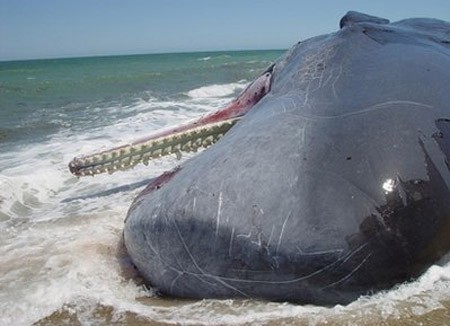 The International Whaling Commission's annual meeting ended with some good news and bad news. The good news is that the ban on whaling has not been lifted yet. The bad news is that it hasn't been reaffirmed and the list of species allowable for hunting by indigenous peoples has been expanded.

But here's the worst news of all:

"A report released Thursday noted high levels of cadmium, aluminum, chromium, lead, silver, mercury and titanium in tissue samples taken by dart gun from nearly 1,000 whales over five years. From polar areas to equatorial waters, the whales ingested pollutants that may have been produced by humans thousands of miles away, the researchers said…Payne said sperm whales, which occupy the top of the food chain, absorb the contaminants and pass them on to the next generation when a female nurses her calf. 'What she's actually doing is dumping her lifetime accumulation of that fat-soluble stuff into her baby,' he said, and each generation passes on more to the next.
Ultimately, he said, the contaminants could jeopardize seafood, a primary source of animal protein for 1 billion people.
'You could make a fairly tight argument to say that it is the single greatest health threat that has ever faced the human species. I suspect this will shorten lives, if it turns out that this is what's going on,' he said."