American evangelical and Holocaust revisionist Scott Lively, who has been under the spotlight for his work fomenting anti-gay hate in Uganda, is now warning that the U.S. military will be taken over by gays as he alleges it was in Nazi Germany. 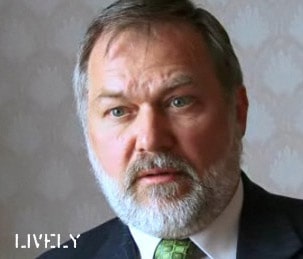 Lively is soliciting donations so that he can personally distribute copies of his book, The Pink Swastika, to each member of Congress, Box Turtle Bulletin reports:

"In the Pink Swastika, Lively posits that the German Nazi movement was, at it’s very core, a homosexual movement, and that militant and violent fascism is the core feature and goal of the LGBT equality movement. He uses that same twisted view of history to argue against DADT’s repeal."

The worst idea in a long string of bad ideas by the Obama administration is the repeal of Don’t Ask, Don’t Tell. I am personally going all-out to try to stop the repeal. I am looking for sponsors to fund a book distribution of copies of The Pink Swastika to every member of the U.S. Senate. To help, make a donation at http://www.defendthefamily.com/help/donate.php. We’re asking for donations of $25 or more to help cover the cost of books and travel.

I will personally hand-deliver copies of the book, and the essay below to each Senate office sometime within the next 10 days so please act quickly. If you are within driving distance of D.C. and would like to join me for a day of lobbying, please e-mail me at sdllaw@gmail.com. Please also distribute this message to your pro-family lists.

May God Save America,

Explains BTB: "Lively certainly can’t be faulted for having an overly-active imagination. Consider his prediction of what will happen if DADT is repealed. First, if gays are allowed in the military, then straight people will refuse to serve. Those straights who remain will turn to violence in response to the unrelenting sexual harassment. That violence will lead to “politically correct” sensitivity training, which will prompt a further exodus. This then leads to a draft, which would be supported by the “anti-war Lefties.” But that sensitivity training? It won’t work, so they will have to segregate the services into gay and straight units. And that’s when the homosexuals take over all the branches of the military — just like, he says, what happened in Nazi Germany."

What do military officers from Britain, The Netherlands, Canada, Israel, and Australia have to say about that? It's nonsense, of course.

Not to mention the fact that "Don't Ask, Don't Tell" repeal is a done deal.

Lively was recently featured in Current TV's 'Misisonaries of Hate' documentary and appeared on a Nightline segment about Uganda's "kill the gays" bill.