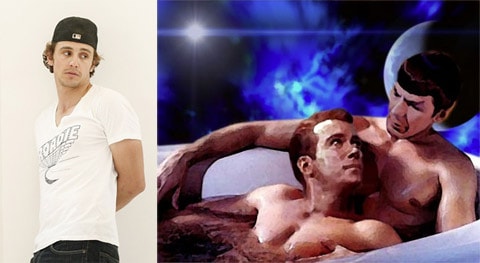 James Franco is mounting his first solo art show, called The Dangerous Book for Boys, on June 23 at the Clocktower Gallery in NYC. What will it include?

"The Dangerous Book Four Boys" addresses boyhood and the "sexual confusion" of adolescence, as Ms. Heiss put it. Short films focus on demolition, showing burning or bullet-riddled structures like a plastic toy home or a large wooden rocket (the exhibition contains originals or replicas of these). Another work explores a romantic encounter between "Star Trek" characters Spock and James T. Kirk.

"I feel like shows or films that deal with kids, they're playing to all of these sexual feelings that you have at that age, but they don't fully admit to it," he said. "So I kind of try to draw that out. The implicit in those shows and books, I try to make it a little more explicit."

Note: The Spock/Kirk bath image isn't necessarily the one that's in the show, it's just one of my favorite Star Trek gay slash art images.