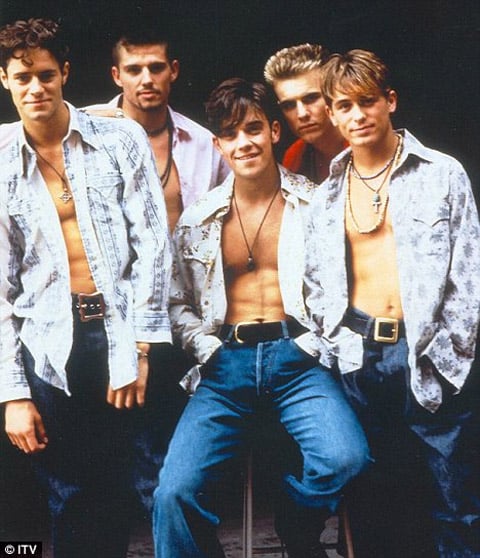 British boy band Take That (above, in 1996) confirmed today that Robbie Williams is back in their midst:

"Williams has returned to the fold 15 years after he stunned the pop world by leaving the chart-topping, boy band.
A statement from the band says: ‘The rumours are true… Take That: the original line-up, have written and recorded a new album for release later this year.
The band – now the original line-up once more of Williams, Gary Barlow, Howard Donald, Jason Orange and Mark Owen – confirmed they have been recording a new album as a five-piece.
The record, which is as yet untitled, will be released in November of this year. The band will then, most likely, tour next year.
It marks the first time the original band have recorded a full album together since the release of their chart-topping album Nobody Else 15 years ago.
Last night, Williams, 36, said: ‘I get embarrassingly excited when the five of us are in a room. It feels like coming home.’"

And Williams and Gary Barlow are also making some sort of 'Brokeback Mountain' parody clip.