Today is the 20th anniversary of a series of events that unfolded in Montreal in 1990, seen as comparable to what happened in NYC following the Stonewall raid of 1968. 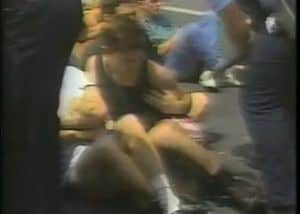 "When cops couldn't find any cash behind the bar, they shut the party down anyway. 'Everybody out!' they screamed.So 400 partygoers — mostly gay men, lesbians and drag queens — filed outside like they were told. Some drag queens climbed out the windows and crawled across century-old rooftops to avoid the cops. They were used to it, too. After all, Montreal police had been raiding and harassing gay spaces for decades, only this time no one was going home: Outside stood 16 police cruisers and 40 officers wielding billy clubs.What no one knew, though, was that history would be made on this morning, at 4am, Jul 16, 1990, and it all began when the cops took off their name tags.'We were scared when the police got into battalion formation because we knew then that we were going to be beaten,' said Montreal photographer Linda Dawn Hammond, now based in Toronto." 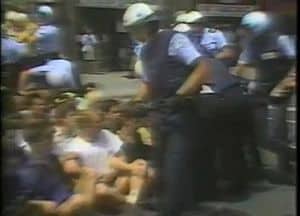 Beatings ensued, as did protests the next day in which demonstrators were dealt with brutally:

"On the afternoon of Jul 16, 1990, fewer than 12 hours after the Sex Garage raid, over 150 gays and lesbians staged a sit-in at the intersection of Ste-Catherine and Amherst streets to protest the brutality at the police bust-up. They demanded a public inquiry, that all charges be dropped and that the gay and lesbian communities each hold a seat on the Montreal Urban Community's minority-relations committee. Everyone went home after being told that then-police chief Alain St-Germain would meet them at downtown Station 25 the next day.Come the next day, 'of course, St-Germain wasn't there,' veteran activist Douglas Buckley-Couvrette, who would die of AIDS in November 2002, told me afterwards.Douglas, along with CBC journalist David Shannon and Paula Sypnowich, represented over 400 protestors at a 'kiss-on' outside Station 25. When their demands were dismissed and they were locked out of the precinct, the protestors demanded to meet with then-mayor Jean Dore, locked arms and occupied the intersection of St-Mathieu and Boulevarde de Maisonneuve.This time the Montreal media was out in full force and the police, armed with latex gloves and billy clubs, didn't disappoint."

A much longer report at XTRA.

Watch a news report from 1990 on the incidents, AFTER THE JUMP…