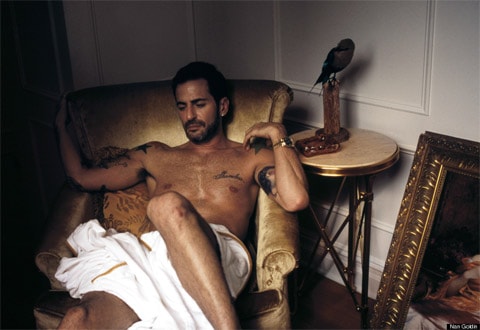 Calvin Klein interviews Marc Jacobs in the new issue of Harper's Bazaar. He asks Jacobs about his propensity for not wearing clothes.

"I had 21 percent body fat four years ago. I was in and out of the hospital because I had flare-ups of ulcerative colitis. I’d be in the office for 16 hours a day, six of which were in the bathroom because I was so ill. I ate nothing but junk food. Basically, the doctor said, 'We’re going to have to remove your colon.' And I said, “I’m not doing that!”

So I went to a nutritionist named Lindsey Duncan, and he said, “If you are 100 percent compliant with what I tell you to do, you will be in better shape than you’ve ever been in, and you will not have to have your colon removed.” I said, 'Okay, sign me up.' He said no caffeine, no sugar, no white flour, no dairy from a cow, take açaí every morning, goji, noni, mangosteen, et cetera, omega-3, wheatgrass shots with ginger. The list is endless…

…He said, 'You gotta laugh every day, you gotta rest every day, and you have to perspire every day, which means you have to go to the gym.' I hadn’t stepped foot in a gym. Well, I hadn’t walked a block in 20 years. So I started, and like everything — I say this, and I hope it’s not misinterpreted, but I like what makes me feel better. That probably doesn’t come as a shock.

When guys started looking at me and asking me out on dates, I felt way better about myself. So it was hard to keep my clothes on, actually."