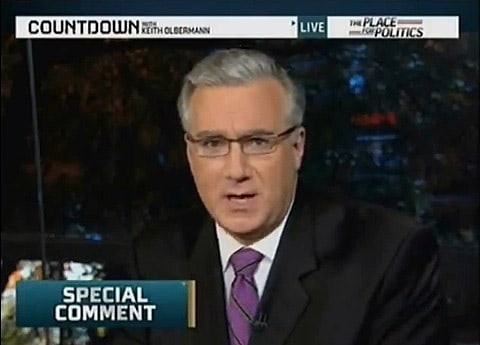 Olbermann sounds off on the distracting controversy over the so-called 'Ground Zero mosque':

"Despite the nobility of our founding and the indefatigable efforts of all our generations, there have always been those who would happily sacrifice our freedoms, our principles, to ward off the latest unprecedented threat, the latest unbeatable outsiders. Once again, at 45 Park Place, we are being told to sell our birth-right, to feed the maw of xenophobia and vengeance and mob rule.The terrorists who destroyed the buildings from which you could only see 45 Park Place as a dot on the ground, wanted to force us to change our country to become more like the ones they knew. What better way could we honor the dead of the World Trade Center, than to do the terrorists' heavy lifting for them? And do you think 45 Park Place is where it ends?"