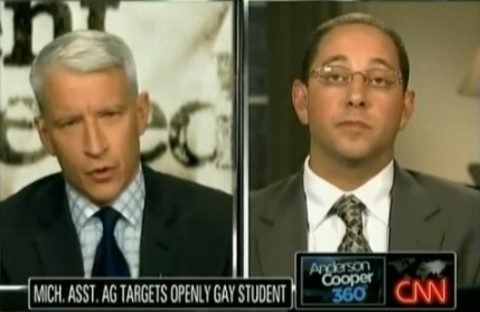 Anderson Cooper pulled no punches last night when he interviewed Andrew Shirvell, the Assistant District Attorney from Michigan who spends his time blogging about Chris Armstrong, the openly gay President of the University of Michigan's student body.

The story has grown over the past few weeks, and Shirvell's looking more and more like a pariah. Even his boss, Michigan Attorney General Mike Cox, has called him "immature," but, as with Saxby Chambliss, the Republican Senator whose staffer last week left a homophobic message on Joe My God, Cox doesn't seem inclined to punish Shirvell.

Asked about Shirvell, Cox simply said, "I don't agree with Mr. Shirvell's tactics, his judgment, or his word choice, but nonetheless I recognize his non–work-related blog is protected by our Constitution." Yes, well, so is free press, which is where Cooper comes into the story, ready to get to the nitty-gritty of what he calls a "strange" story. That's putting it nicely.

"Are you a bigot?" "Aren't you a cyber-bully?" "It appears, though, that you're obsessed with this young gay man." That's just a sampling of Cooper's exchange with Shirvell, who can't seem to understand why so many people are mad at him, because, as he puts it, he's simply playing politics.

"I sense anger in your voice," Shirvell tells a somewhat amused, and just as confused, Cooper.

Watch Shirvell squirm and Cooper question, AFTER THE JUMP.