As a legal principle used to determine adoptive rights, attachment theory could encompass grandparents who assume early childhood caregiving roles and the unmarried partners of a child's parents. It would also pave the way for foster parents to become adoptive parents and permit second-parent adoption in sperm donor and surrogacy cases. The key here is grounding adoption rights on the parent-child relationship, not some independent characteristic of the parent that has little to do with his or her ability to raise a child. It would not matter that a prospective adoptive parent is a man or a woman, black or white, gay or straight; what would matter is whether the child has formed a lasting bond with the prospective parent.

It would have changed the result in a 1991 New York case, In the Matter of Alison D. v. Virginia M. Alison and Virginia were a lesbian couple raising Virginia's biological daughter together. After the women split up, Alison continued to provide financial and emotional support while remaining involved in the child's life. The child routinely called both parents "mommy." When Virginia terminated Alison's contact with the child, Alison sued for visitation under New York's Domestic Relations Law, which allowed "either parent" to bring suit for judicial determination of guardianship or custody of a minor child. The court declined to entertain Alison's suit, refusing to include in the definition of "parent" any non-parent who had nonetheless developed a relationship with the child. Judge Judith Kaye dissented, noting that the statute never defined "parent" and had an overarching goal of the best interest of the child. To Judge Kaye, the child's best interest would be to keep both caregivers with whom she had a close relationship in her life.

Here, a same-sex marriage law would have made Alison's life a lot simpler. If New York permitted same-sex marriage, "parent" could be statutorily defined to include persons of the same sex. As it stood in 1991, Judge Kaye was ahead of her time.

But, same-sex caregivers are not without recourse in states without same-sex marriage. State courts have what lawyers call "equitable powers" to do what's right and fair in certain circumstances where, in this case, it would be in the best interests of the child.  Wisconsin, in In re Custody of H.S.H.-K., and New Jersey, in V.C. v. M.J.B., follow that approach.

What do you think of the attachment theory approach to adoption? Critics suggest that it erodes the rights of biological parents who give up their children to, say, grandparents while they detox or get a better job or go back to school to make money to raise the child. Should they have the right to come back into their children's lives? What of so-called polyparented households, as discussed here, where a child has developed a bond with three or more parents? Should adoptive rights under the attachment theory be determined by the degree of attachment? And, if not, should all four parents be permitted to adopt a child?

Outright bans on gays and lesbians becoming adoptive parents are failing under the weight of Romer v. Evans, Lawrence v. Texasand the evolving and growing consensus that a parent's homosexuality does not rationally relate to his or her ability to be a great caregiver. Romer said that simple distaste for or animus toward homosexuals as a group does not justify discriminating against them, and outright bans on homosexual adoption are often based on the hurtful stereotypes of gay men and women as somehow predatory, immoral and sexually deviant.

Currently, 9 states – California, Colorado, Connecticut, District of Columbia, Illinois, Massachusetts, New Jersey, New York, Pennsylvania and Vermont — and the District of Columbia permit second-parent adoption for LGBT partners. Second-parent adoption is where a person petitions to adopt the child of his or her partner. In 16 other states — Alabama, Alaska, Delaware, Hawaii, Iowa, Louisiana, Maryland, Minnesota, Nevada, New Hampshire, New Mexico, North Carolina, Oregon, Rhode Island, Texas and Washington — same-sex partners have successfully petitioned for second-parent adoption in some jurisdictions. In these states, there are no state-wide guarantees for prospective LGBT adoptive parents. In many other states, the status of LGBT adoption is unclear.

Before last week, Florida was the only state to explicitly prohibit all gays and lesbians, whether they be individuals or couples, from adopting. Same-sex couples are explicitly forbidden from adopting in Florida, Utah and Mississippi. State courts have ruled that second-parent adoptions are not available under current law in Kentucky, Nebraska and Ohio, and courts in Michigan have ruled that unmarried individuals may not jointly petition to adopt.

On Nov. 4, 2008, Arkansas voters approved a statutory ban on adoption and foster parenting by unmarried individuals cohabiting with a sexual partner. But, on April 16, 2010 a Pulaski County Circuit Judge ruled the statutory ban prohibiting unmarried couples from adopting to be unconstitutional. The decision will likely be appealed to the Arkansas Supreme Court.

For those considering the adoption route, consult a qualified family attorney who specializes in LGBT adoption.  Laws differ from state to state.  Lambda Legal provides a great summary here. 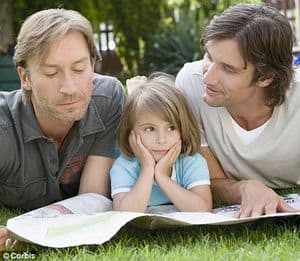 The notion, popular among progressives and LGBT advocates, that child-rearing does not play a role in our conception of marriage is not quite accurate. Children may not be necessary to legally define marriage, but to many of us, marriage is about that ultimate expression of love, bringing another life into this world and providing Little Jimmy or Little Jackie with an environment the fosters growth, maturation and eventual independence. Let us then distinguish between horizontal relationships like marriage, the legal definition of which should not depend upon the presence (or conceivable presence) of a child, and vertical relationships like caregiving and child-rearing, that ultimately define what our married life will be like.

Like I argued in an earlier piece about the legal quandaries faced by lesbian couples who seek out sperm donors to create their families, gay men who adopt are also wading into the oft-unkind waters of the law. Undoubtedly, things are changing. Just last week, an intermediate appellate court in Florida overturned that state's ban on gay adoption, but that decision is limited. It says nothing about gay couples who would like to adopt together or even the potential for more limited parental rights of a prospective homosexual partner of an adoptive dad.

The uncertainty in LGBT adoption law results in unfriendly decisions. There is no single legal theory about adoption that would bring LGBT parents in from the cold. For obvious reasons, biology is not available in adoption cases. Plus, it is not at all clear biological parents warrant parental rights in all cases. Nor can we resort to the overbroad "best interests of the child" standard alone. The more vague the legal standard, the easier it will be for an anti-gay court or legislature to exclude LGBT parents out of an antiquated, yet still beloved, theory that heterosexual parents are simply more "ideal" for child-rearing. So, we need a principle to help judges identify what is or is not in the best interest of the child.

Many legal theorists believe that governing principle is "attachment theory." For this theory, we are indebted to J. Bowlby and child psychologists who, with near unanimity, find that attachment theory best describes the relationship between young children and their caregivers. Attachment theory posits that a child is open to becoming strongly attached to an adult caregiver through the first year of life; after that, the child may be open to such attachment, but only if the circumstances permit. Separating the child from the caregiver will cause distress, and could become traumatic if the caregiver becomes completely unavailable.

This should not be foreign to those of us with nieces or nephews, those of us who work in day care centers and anyone else around young children. The moment mom or dad drops Little Andy off at daycare, Andy cries. That's a good shorthand for attachment theory.

If we take this theory and use it as a principle of law governing whom should be allowed to adopt, we get a lot of interesting results.

Continue reading "Children Are So Gay" AFTER THE JUMP.