In November, 2008, Judge Cindy Lederman ruled that Florida's ban on gay adoption is unconstitutional. The ruling allowed Frank Martin Gill to move forward with adopting two brothers, ages 4 and 8, who had been in Gill's foster care since 2004. 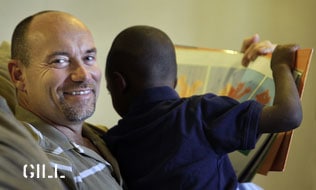 In the 53-page 2008 ruling, Lederman wrote: "It is clear that sexual orientation is not a predictor of a person's ability to parent."

The state of Florida appealed the ruling, and today a Miami appeals court ruled against the state:

"The 3rd District Court of Appeal issued its decision Wednesday affirming a lower court's decision that the ban is unconstitutional. Florida is the only state with a law flatly banning gays from adopting children without exception. Gays can be foster parents in Florida. A Miami-Dade County judge ruled the gay adoption ban unconstitutional in 2008, but the state appealed. The case will ultimately go to the state Supreme Court. Martin Gill and his male partner, along with the American Civil Liberties Union, filed the lawsuit in their attempt to adopt two brothers, whom they have cared for as foster children since December 2004."

This is the case for which discredited "ex-gay" fraud George "rentboy" Rekers was paid $120,000 to serve as an "expert" witness for the state.

“I think we need to review [the case]. My comments really reflect that it’s better to have more of the judicial branch involved in this process. I think that most who follow the judiciary recognize that what’s in the ‘best interest of the child’ is what should be paramount in these kinds of decisions. That’s what I believe and I think that’s what will be the best for them."