Grayson campaign manager Susannah Randolph defended the 30-second commercial by explaining that Webster was "speaking at a group that teaches that women should be submissive to men." Quite right: the audio comes from Webster's appearance at the Institute in Basic Life Principles, whose founder, Bill Gothard, doesn't believe women should work outside the home. Webster in 1990 spent over $4,000 on fliers for the group.

Randolph breaks it down, "[Webster's] always pushed an agenda that is anti-woman."

The entire thing reminds one of how conservative activist Andrew Breitbart edited audio to make it sound like former Agricultural Department official Shirley Sherrod had a racial bias. Whether Grayson can escape from this scandal unscathed will be decided in November. 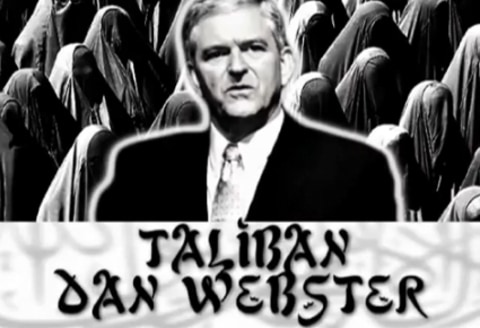 Florida Rep. Alan Grayson's campaign commercial comparing Republican opponent Dan Webster to the Taliban hasn't gone over very well. It turns out that the meat of Grayson's commercial, Webster's "comments" that women should "submit" to their husbands, was taken out of context. Will this seal the Democrat's electoral fate?

Turns out Webster wasn't telling wives to "submit" in the speech; he was actually urging men to stop using the Bible to justify their beliefs. "I have a verse for my wife; I have verses for my wife," said Webster.

"Don't pick the ones that say, um, she should submit to me. That's in the Bible, but pick the ones that you're supposed to do. So instead, love your wife, even as Christ loved the church and gave himself for it, as opposed to wives submit yourself to your own husband."

The Orlando Sentinel has blasted Grayson's commercial, and wrote, "By twisting Webster's words, Grayson risks eroding some of the support he may have won from independent voters."

Clearly hoping to capitalize on the anger, the Webster campaign distributed a quote from the candidate's wife, Sandy, who called the Taliban ad "shameful."

"Mr. Grayson seems to have a problem telling the truth and no problem misleading the public," she said. "Dan has been an amazing husband and father, and the finest man I have ever known. Mr. Grayson should be ashamed of his nasty smears against my husband."

But is it truly a smear, or just an example of political expediency aimed at the heart of Webster's politics?

Previous Post: « Will Clinton Speak Out Against China’s Gay Crackdown?
Next Post: Ann Coulter on Larry King: ‘Everybody in America Wants To Be Black,’ Get Civil Rights »