White House Press Secretary Robert Gibbs remarked on the Senate Filibuster of the Defense bill as the vote went down: 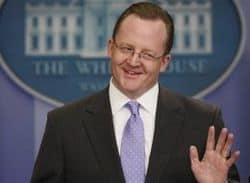 "Sixty is the new 50 and I don't mean age. To do anything in this town now you have to get 60 votes. And it is certainly not the way that many of the people who work in the Senate, including senators, thought that this is the way it ought to work."

Sam Stein adds: "Gibbs also stressed the 'frustration' he and other White House officials feel over the fact that funding for the "Pentagon and for our troops" had been delayed. He also re-affirmed the president's commitment to DADT repeal and the Dream Act. 'I don't think this is the end,' he offered, before punting on a question as to whether or not the package of legislation will be passed in the lame duck session after the November elections. 'Obviously there will be a whole host of issues including DADT that remain undecided. Our focus right now is trying to get the business of the people done as congress remains in session.' (A Senate aide confirmed to the Huffington Post that Reid will be bringing up the same package after the elections)"

Added Gibbs: "You have in the defense bill, obviously, very important funding for the priorities of our Pentagon and our troops,. The president also supports repeal of don't ask/don't tell and the DREAM Act … And we're disappointed at not being able to proceed to the legislation, but we'll keep trying."