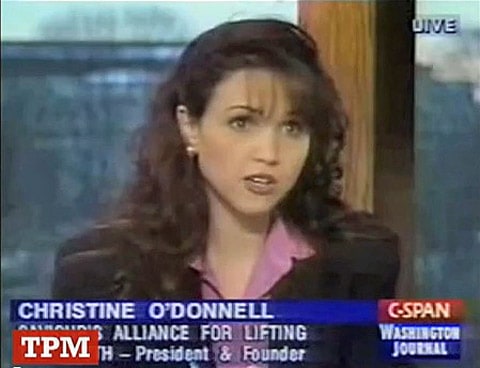 Talking Points Memo yesterday posted this 1997 video of anti-masturbation, gay-baiting Delaware Tea Party senate candidate and "ex-gay" proponent Christine O'Donnell discussing AIDS and how the government is spending too much to fight it.

"TPM has unearthed a 1997 C-SPAN video that shows O'Donnell voicing concerns that a drag queen ball 'celebrates the type of lifestyle which leads to the disease,' objecting to terming those with AIDS 'victims' and calling AIDS a consequence of a certain "lifestyle which brings about this disease."

After complaining that "there is a gross disproportionate allocation of funds" going to AIDS treatment and prevention in comparison to resources designated to combat heart disease, O'Donnell compared living healthier to changing the "lifestyle" that she said lead to AIDS.

"When somebody finds out that they're at high risk for heart disease, they cut out the fatty foods, they start exercising, they quit smoking. However, our approach to AIDS, when you're in a high risk behavior, is to eliminate the consequences so that you can continue in your lifestyle which brings about this disease," O'Donnell said.

Referring to people who get AIDS as victims, O'Donnell said, was "the kind of spinning with words and manipulating words that empowers the bias when it comes to AIDS."

O'Donnell was also against (surprise) the distribution of condoms.

In related news, Think Progress reports that O'Donnell is so "pro-truth" that she says she wouldn't lie to Nazis asking if there were jews hiding in her home.