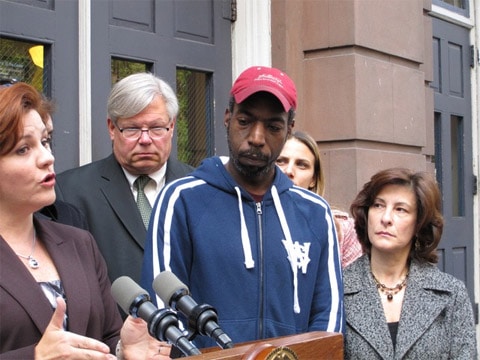 "(Davis) described how he was working the bar on Oct. 11 when a hulking Frederick Giunta, 45, walked in and started picking on an African-American customer, hurling racial and homophobic slurs at him. Minutes earlier, police said Giunta had punched a 31-year-old Brooklyn man after trying to snatch his wallet outside the nearby Ty's Bar, on Christopher Street. 'He could really hurt someone,' Davis said of Giunta. 'I was absolutely deteremined to do what small part I could to get him off the street.' … 'I tried to move the other customers away from him, they were upset, and he punched me.' Davis, a former Wall Street underwriter who lives in Chelsea, said he was left 'spitting blood' for the next hour. 'It's upsetting to think that when you got to work, you could be a victim,' he said. Giunta, who has been charged with assault as a hate crime, is currently being held at Rikers Island on $25,000 bail and is due back in court on Oct. 21."