A gay couple living on Prince Edward Island in Canada were forced from their home by a fire thought to have been set on purpose: 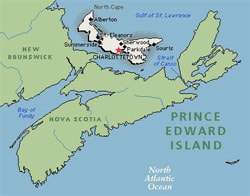 "A woman says her neighbours — a same-sex married couple — were terrified when suspected arson forced them to flee their home early Monday morning in Little Pond. 'They were super-afraid because they didn’t know if somebody was waiting for them outside the building,' said Maureen Campbell. She says the two men were sleeping when the fire started. One man had to drag his partner out of the bungalow…Police would not say if they are investigating the fire as a possible hate crime or as an attempted double murder. RCMP Sgt. Bob Fogarty would only reiterate that the police consider the fire to be a criminal matter and that arson is suspected in the blaze that razed the couple’s home. Members of the Souris RCMP and local fire departments responded to the bungalow fire at 4 a.m. Monday. Souris RCMP was also called to the same address after the mailbox was burned on Oct. 12."